All For Kelah “The King Of The River”

A feisty fighter and a prized table fish, the kelah is the undisputed King of the River in Malaysia.

Frankie Chang is one lucky guy! After 20 minutes of tussling with the King of the River, he had a 2kg kelah safely in his landing net.

Chang, from New Zealand, was holidaying with his friends from Kuala Kubu Baru. They had been camping for two nights on the banks of Sg Lebir at Lubuk Kedah, Kuala Koh, Taman Negara Kelantan, and it was on the third day that this fantastic catch happened. 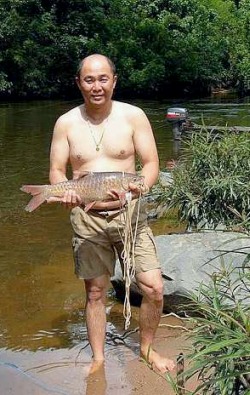 It encouraged them to persist in their patience.

The kelah or Malaysian Mahseer (Tor tamroides), a member of the carp family, is a slim, muscular fish equipped with strong jaws. Its reputation of crushing inferior quality fish hooks and spitting them out is legendary. The strength of its pull, when hooked, belies its size and, hence, it is a much sought-after game fish.

In addition, it is an excellent and expensive table fish!

Being omnivorous, the kelah feeds on crustaceans, insects, frogs, smaller fish and fruits that fall into the river. Jungle figs are relished as they float down the river.

You can also see these whoppers in their natural habitat at Sg Relau and Kuala Juram in Taman Negara Merapoh where, unfortunately, fishing is not allowed. 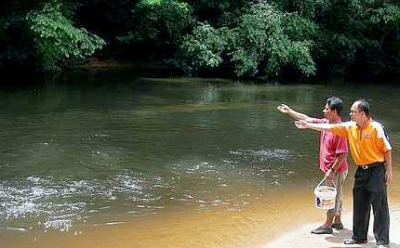 Sg Lebir, a stone’s throw from the Department of Wildlife and National Parks Office at Kuala Koh, offers anglers an opportunity to land this fish. Kuala Koh is 90km from Gua Musang.

There are five fishing spots where anglers can camp. These are at the river bends or lubuk where the water is deeper. Private boat operators can ferry a maximum of four passengers and their gear to the desired fishing spot, with the fees varying from RM60 to RM120 for a return trip, depending on the distance from the jetty.

The National Park charges an entrance fee for all visitors and an extra RM10 per angler. Each angler is permitted to bring in two rods, one for use and the other as a spare. Yes, a trophy kelah can easily snap your rod in two!

Only natural food found within the National Park, like ficus fruits, is allowed to be used as bait. Kelah can be caught by using the ledgering method, where the main line runs through a weight to anchor the bait at the bottom of the river. Day-trippers can try their luck along the banks of the river near the Park HQ.

At least 300m of the river fringes are presently accessible to anglers on foot, starting from the chalets.

Osman Bakar, the deputy superintendent of the park here says, “There are kelah in this stretch too, but they are not as big as those caught in the deeper lubuk. Besides kelah, you can also catch sebarau (Hampala Barb), lampan (River Barb) and baung (River Catfish) here.”

What an enticing piece of information!

Recently, the park management noticed that the catch, as reported by anglers was reduced. With such intense fishing pressure, it is not surprising that the anglers on the river banks may be outnumbering the kelah in the river!

To conserve stocks, there is a bag limit.

Each angler is allowed to take out only one kelah. The maximum size for a keeper is 4kg. A fish bigger than that must be released immediately, after photographs have been taken, that is! Anglers are allowed to go in parties of up to eight members, and only once a month.

One of the measures to increase the stock of kelah is to prohibit fishing in the upper reaches of the river so that natural breeding is not disturbed. Lubuk Pertang, a half-hour’s boat ride from the jetty, is one of the spots declared a fish sanctuary.

Three lodges were built there in June 2008 to house research scientists. In December 2008, the Wildlife Department started feeding the fish there with pellets every day. Visitors are allowed to go to Lubuk Pertang to feed and interact with the fish.

In June 2008, work on a breeding complex for kelah was started behind the Park’s mosque. The huge tanks have been completed and are ready for the stocking of breeder fish for the project. The idea of setting up a fish sanctuary, fish feeding and a breeding complex emulates the very successful set up at Taman Negara Sungai Relau-Merapoh.

Maybe it would be a better option for the kelah if a catch and release system is introduced, like what is done for the Pacific Sailfish (Istiophorous platypterus) in the East Coast.

Anglers travel long distances and pay good money to catch and then release them, after photographs have been taken. If a similar scheme is introduced for the kelah in Malaysia, every angler in our country would then have a fair chance to challenge the might of the King of the River. 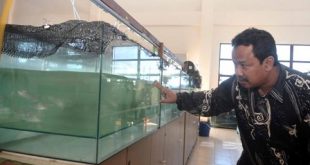