Kelah Is The “King” Of Fish In The Kuala Tahan Sanctuary 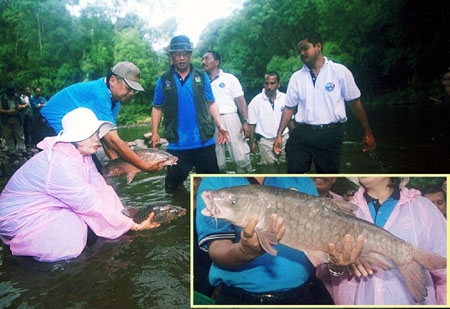 KUALA TAHAN – Do you know that the “king” of the river fish – the “kelah” or Golden Mahseer – takes three years to grow to a size of three kilogramme? To grow to eight kg would take some 40 years, depending on its environment and food sources.

The kelah (scientific name “Tor Tombroides“) which is also known as the “empurau” in Sarawak and “Mahseer”  in India, can be found in several main rivers in the country except Perlis.

The prize fish which can fetch RM100 per kg, is now scarce as its population has dwindled either because of over-fishing or destruction of its habitat brought about by erosion.

Anglers would have to persistent enough to trek into the upper reaches of the rivers to hunt for this game fish that foreigners call the “Malaysian Golden Mahseer“.

Among the places where anglers still go for the thrill of landing the kelah are certain pools in the rivers of Taman Negara near Jerantut, like Sungai Tahan, Sungai Kenyam and Sungai Tembeling.

Among the rivers, the Sungai Tahan which flows for about 55 km from its source in Mount Tahan to meet with Sungai Tembeling in Kuala Tahan, is said to be the main home of the kelah.

With pools of five to 15 metres deep, its water darkish, swift and punctuated with waterfalls and rapids, the river is the natural habitat of this game fish which loves to hide and play among the many sunken logs and rocky banks.

To ensure that the kelah does not suffer the same fate as those in other areas, the authorities had since 2000 gazetted that river as a reserve where no fishing by whatever means is allowed.

With the ban, the kelah is free and safe in Sungai Tahan. However, because its reproduction and growth rate is slow, the fish is said to be scarce and elusive.

As a result, the Wildlife Protection and National Park Department (Perhilitan) with the cooperation of Usains Holding Sdn Bhd, a research wing of Universiti Sains Malaysia (USM), had created an Ikan Kelah Sanctuary in Sungai Tahan.

Head of the project, Professor Dr Eddy Tan, 57, said the idea of the sanctuary was mooted in early 1980s but they were able to realise it only in November 2001 after securing a RM5-million allocation under the 8th Malaysia Plan.

He said Sungai Tahan was chosen for the sanctuary because it is the natural spawning ground of the fish. Although fishing is outlawed for the whole river, the sanctuary project is confined to a pool area called “Lubuk Tenor”, named after the Tenor river nearby.

Fringed by fruit trees such as guava, “neram”, “temarih” and “ara” which are among the favourite food of the fish, the pool with a depth of four metres and the size of a badminton court, is about 40 minutes by boat from Kuala Tahan.

Dr Eddy said the research work was more of observation and study rather than scientific research because it did not disturb the fish.

“By this approach, we do not catch the fish by hooks or nets to gather data. Measurement of weight and size is through observation.

“Probably because we do not frighten them, the fishes in Lubuk Tenor appear to be more tame,” he said.

Although men are their main enemy, the kelah in Lubuk Tenor are not exactly free from danger. “The kelah fry are food for another game fish, the `subarau’ while those weighing one to two kg are the preys of “toman” (or the snakehead) and tapah,” he said.

One of the research work is to “persuade” the kelah in the upper and lower reaches of the river to make Lubuk Tenor their home.

Jamalluddin Hamzah, 59, a founding member and former head of the sanctuary project, has many interesting tales to tell not only about how they “persuade” the fish but also how they convinced the local people around Kuala Tahan to appreciate and help make the project a success.

“When we first started, several of us had to go to the pool three times a day to scatter the food pellets made of seeds – morning, noon and evening,” he said.

Jamaluddin also sounded a bell to call the fish when they scattered the food. “At first, only the lampam fish were attracted to the pellets. But three months later, several kelah weighing between one to three kgs were seen rushing for the food,” he said.

After a while, they stopped using the bell and the kelah fish would rush for the pellets whenever they are thrown into the pool.

And their efforts seemed to work because they have seen 40 to 50 of the kelah in the pool, each weighing from one to five kg.

Jamaluddin said the villagers initially thought they were mad, wasting government money by feeding the fish in the river.

Dr Eddy said without the cooperation of the villagers, it would be difficult for the project to succeed. In this connection, they held several talks with them on the importantance of preserving these national treasures.

Students from schools around Kuala Tahan were brought to Lubuk Tenor to see how the kelah can be tamed and fed.

“After seeing for themselves how the wild fish can be tamed like those in the aquariums, the local people now realise the importance of the sanctuary project,” he added.

Apart from the villagers, the project also involved the Orang Asli of the Batek tribe who live in Taman Negara.

“Almost 25 percent of the workers at the sanctuary come from this tribe. Now, the villagers and the Batek are acting as the eyes and ears of Perhilitan in case anglers come to poach in the prohibited area,” he said, adding that there has been no cases of poaching so far.

The sanctuary project is now a tourist attraction in the national park which is helping the local economy. The number of visitors to the park has increased from 50,000 in the 1990s to 66,000 last year.

Lubuk Tenor itself receives an average of 100 visitors a month since 2002.

According to Dr Eddy, the kelah can live up to 100 years which means that they can be passed on from generation to generation.

Based on the experience at the sanctuary, he believes that the fish can be reared in aquariums and exported like other aquarium-reared fishes.

They had in fact reared the kelah in glass tanks in another sanctuary in Sungai Relau in Gua Musang, Kelantan, where the fishes were successfully trained to suckle liquid food from a feeding bottle after six months.

For diehard anglers, they still have the chance to experience the fight of the game fish in another pool found recently by the management of Taman Negara and Unisains, that is, at Pos Melantai 2.

A five-day and four-night package costing RM1,000 per person is now available to anglers and they come with experienced guides, boat rides, food and lodging.

To get to Pos Melantai 2, the anglers would have to take a boat ride of about an hour from Kuala Tahan, before continuing their journey by canoe and trekking through jungle trails for another three and half hours.

Anglers however can only catch and tag the kelah before releasing the fish back into the pool.

Dr Eddy said from his observation, there are 40 to 50 kelah in the Pos Melantai 2 pool and the biggest ever landed, weighed 8.7 kg.